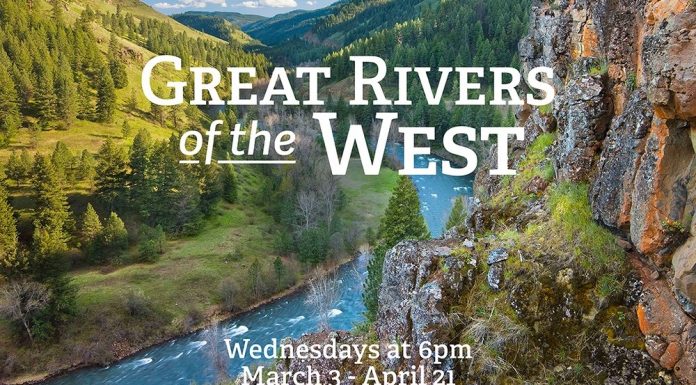 Western Rivers Conservancy will launch March 3, the first episode of its new web series, Great Rivers of the West. The eight-part series will feature live, fast-paced and informative slideshows by author and conservationist Tim Palmer.

Every Wednesday at 6 p.m., Pacific Time, registered viewers can learn about a different state or region on a virtual visit to the area’s keystone rivers, be taught why these streams matter for fish and wildlife and how to experience them independently.

Fishpond founder and CEO Johnny Le Coq, and WRC co-founder and President Sue Doroff will kick off the episodes. Doroff and Palmer will be available to answer questions at the end of each show.
Throughout the series, Palmer will look at the West’s top rivers through the lenses of conservation and recreation – the same ones that have focused WRC’s efforts to create sanctuaries for fish and wildlife and improve recreational access to hundreds of rivers and streams for more than 30 years.

“We look at rivers through a broad filter,” said Doroff, “One that combines science and soul, wildlife and recreation. Great Rivers of the West was a tool we developed to understand the rivers of the West, and now we want to share it with everyone who wants to know rivers better, whether you’re an angler, boater, hunter, hiker or birder.”

Palmer has made the study of rivers his life’s work, paddling, photographing and writing books about them for more than four decades. He and WRC originally began producing Great Rivers of the West as a report over a decade ago for WRC as a tool for understanding the most outstanding rivers of the West.

WRC’s approach to conservation is through land acquisition – working with willing sellers to permanently protect river land and habitat. From entire watersheds to smaller parcels at critical locations, WRC buys land and puts it in the hands of long-term stewards for the benefit of fish and wildlife and to create public access.

The WRC has conserved critical river stretches, tributaries and confluences; returned desperately needed water to salmon and steelhead streams; created cold-water sanctuaries for salmon and other wildlife; safeguarded boating access sites, trails and camping areas; and created access to tens of thousands of acres of public lands. For the last decade, it has used Great Rivers of the West to understand the riverscapes of the region and help inform where to focus its efforts.

This year, WRC commissioned Palmer to update the report, and this time WRC wanted to share the information with river aficionados everywhere.

“As people take to rivers and the outdoors in record numbers, there’s never been a more timely moment to release a series about experiencing, understanding and conserving the great rivers of the West,” said Doroff.

Everyone who registers for the Great Rivers of the West web series will be entered to win high-end gear from Fishpond and Sawyer Paddles & Oars, two of the series’ sponsors. Each week, at the close of every episode, a winner will be selected and announced.

To register for the series or to learn more about Western Rivers Conservancy, visit westernrivers.org.