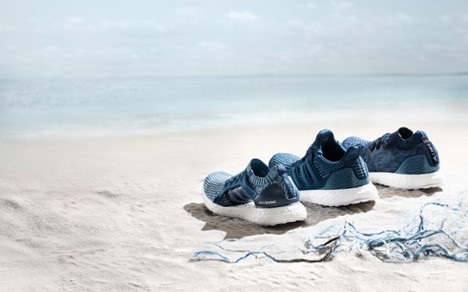 Adidas revealed some lofty sustainability goals for 2021. The German athletic powerhouse stated more than 60 percent of its products will be made with sustainable materials. This marks the next step in Adidas’ mission to end plastic waste.

The company – a partner of environmental organization Parley for the Oceans – said it will produce 17 million pairs of shoes with recycled plastic waste from beaches and coastal regions. During the past year, it manufactured more than 15 million pairs of shoes with the waste product and collected alongside Parley almost 7,000 tons of plastic waste.

Adidas also revealed it will launch in the spring the successor to the UltraBoost DNA Loop that was raffled to consumers last October. During that month, the company revealed the model, which was constructed from a 100 percent reusable TPU material that’s spun to yarn, knitted, molded and attached to a full-length Boost midsole without ever needing to use glue.

Looking even further forward, Adidas noted it will shift to using only recycled polyester from 2024 onward.

“Sustainability is an integral part of the Adidas business philosophy. We have continued to invest in sustainability initiatives during the coronavirus pandemic, and we will significantly expand our range of sustainable products in 2021,” Adidas CEO Kasper Rorsted said in a statement.

Additionally, the athletic giant revealed plans for a vegan product line. After launching vegan versions of several classic sneakers including the Stan Smith this year, Adidas is developing with partners a biological leather alternative made from mycelium that will be used in footwear.

In its statement, Adidas revealed its goal of achieving global climate neutrality by 2050.