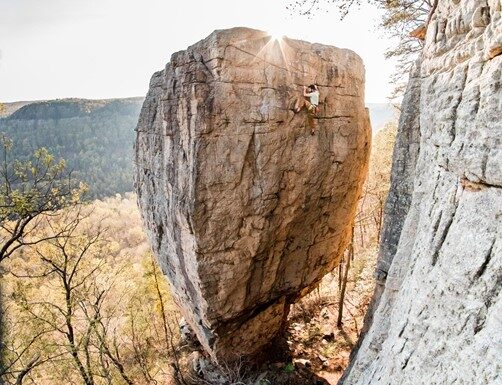 Access Fund and Southeastern Climbers Coalition (SCC) have purchased Woodcock Cove in eastern Tennessee. The acquisition and land swap preserves 64 acres of undeveloped land and approximately 60 existing routes, with room for 100-150 more, at all levels.

The remote property includes a mile of sandstone cliff line, from 30-90 feet tall, forest land, streams, important wildlife habitat, and scenic views. Also preserved is a rare 75-foot freestanding sandstone tower, with routes on all sides. The climbing is on high-quality orange and tan sandstone, reminiscent of the New River Gorge.

“This purchase establishes a foothold for public access to recreation in the Sequatchie Valley and protects a critically important landscape that enhances climate resiliency in the region,” said Andrea Hassler, Executive Director for the Southeastern Climbers Coalition. “We are ecstatic that climbers in the Southeast continue to play a key role at the intersection of climbing and conservation.”

While a handful of climbers have visited the area in the past 10 years with landowner permission, public access to Woodcock Cove has never been secure. Last summer, local climber Michael O’Donnell tipped off SCC and Access Fund that the cliff line was for sale—listed as two separate parcels on the open market.

The two organizations worked together to buy one parcel, securing half of the cliff line. The property with the other half of the cliff was under contract and sold to a local couple, Amanda and Mike Murphy. SCC was able to strike a land swap deal with the Murphys, exchanging 27 acres of blufftop land for the additional half mile of cliff line and its 30 established routes.

The newly acquired climbing area is a win for the area’s outdoor recreation economy and conservation. In addition to climbing, the project protects scenic views of Sequatchie Valley, wildlife corridors, streams and forestland. Caleb Timmerman photo.

Centrally located between Chattanooga, Nashville, and Huntsville, Alabama, Woodcock Cove sits high on the rocky, western rim of Sequatchie Valley. The largely rural area is dotted with small towns but dominated by undeveloped agricultural and forest lands. This area has been identified for its high conservation value, climate resilience, carbon sequestration, biodiversity, and connected forest habitat.

This area is classified by the state of Tennessee as economically at-risk and distressed. Access Fund, SCC, and county officials hope that sustainable climbing at Woodcock Cove will bring tourism dollars to help bolster the local economy. Studies in the region, including one completed by the University of Tennessee Chattanooga, find that rock climbers make a significant economic impact at nearby climbing areas like Foster Falls and Denny Cove—in some cases spending up to $14 million a year.

The Woodcock Cove purchase is the second largest acquisition that SCC has undertaken since its first purchase in 1999. Access Fund supported the purchase with immediate funds from the Climbing Conservation Loan Program (CCLP). Woodcock Cove is the 30th climbing area conserved through the CCLP, Access Fund’s revolving loan program. SCC will repay the loan over time, returning money to help Access Fund save another new or threatened climbing area in the future. Since CCLP’s inception, Access Fund has loaned $3.2 million to local climbing communities across the country to secure and protect climbing areas.