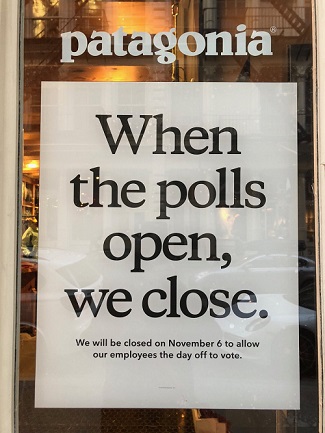 Patagonia will be closed today to allow all employees to vote with paid time off. The closure includes all U.S. stores, offices and the distribution center in Reno, Nev. Patagonia has been doing this on Election Day since 2016.

As a co-founder of the Time To Vote movement, Patagonia is committed to ensuring its employees don’t have to choose between voting and earning a paycheck. Employees who voted early or voted by mail are encouraged to serve as poll workers, or by volunteering as poll watchers with reputable civic engagement groups, or by helping to get out the vote in other ways.

Time to Vote, which Patagonia created in 2018 with Levi Strauss & Co. and PayPal, has recruited 2,011 companies to date. All the companies are committed to providing time off so their employees can vote.

Other ways Patagonia is supporting the midterms: