The U.S. retail market has been the largest in the world for at least a century, and although China was inevitably on track to claim this mantle from the U.S. relatively soon, it was not expected to transition as early as 2020, said analysts at eMarketer. However, due to the global pandemic and its varying impacts on different markets, the trendlines have changed.

The US economy and its rates of consumption are expected to be impacted more negatively than China’s, and eMarketer now projects that China will produce $5.072 trillion (RMB35.043 trillion) in retail sales in 2020, compared with $4.894 trillion in the U.S.

“Quirkily, our medium-term estimate for the US recovery shows the nation will reclaim the No. 1 position in 2021 and 2022—but after that, China will once again move to the top position, where it will likely remain for several decades,” said eMarketer analysts.

International factors, though, could offset China’s recovery. “China has an economy that is deeply reliant on trade, globalization, cross-border investment and the performance of other major economies around the world,” said Ethan Cramer-Flood, eMarketer forecasting writer.

“Regardless of how well the country’s system deals with the virus, good economic news may well be a long way off if the rest of the world slips into long-term recession,” he said.

Although China’s economic growth is not export-driven as it once was, its labor market is still reliant on manufacturing and trade, which means wages (and therefore consumption) are vulnerable to a loss of demand from the rest of the world. If North America, Europe and Japan do not recover quickly, it may not be possible for China to pull out of recession either. 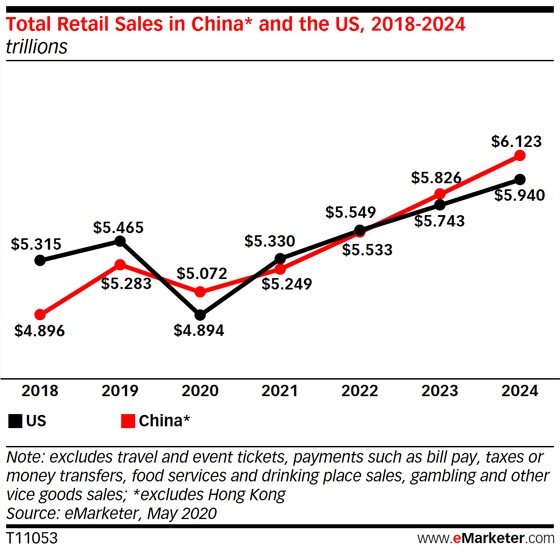 Webinar: How to Create an Instant Urban Trail→