More than 20 years after Adidas ceased production activities in Germany and moved them to Asia, the German maker of sportswear has announced it will start marketing its first series of shoes manufactured by robots in Germany, as Adidas unveiled the group’s new prototype “Speedfactory” in Germany.

As of this year, the factory will begin large-scale production. What’s more, Adidas will open a second Speedfactory in the U.S. in 2017, followed by more in Western Europe. According to the company, the German and American plants will in the “mid-term” each scale up to producing half a million pair of shoes per year.

The shoes made in Germany will sell at a similar price to those produced in Asia, said the company, where Adidas employs around one million workers. Rival Nike is also developing its robot-operated factory.

It took 50 years for the world to install the first million industrial robots. The next million will take only eight, say experts. Much of this growth is taking place in China, which has an aging population and where wages have risen. So ultimately, after displacing western manufacturing workers, robots are poised to do the same in developing economies, too. At that point, there will be little need to talk about re-shoring jobs, as those jobs will no longer exist. 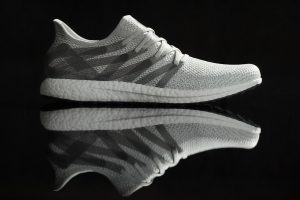 The first silhouette produced by its Speedfactory facility, the Futurecraft M.F.G. (or Made for Germany)