Diversity efforts can consider ‘where’ as much as ‘how’

The effort to increase diversity and become more inclusive within the outdoor community is multi-faceted and across multiple fronts. While there is much hard work still to do, the industry and community certainly has expressed renewed interest in working to improve participation and bolster employment of underrepresented persons. But maybe along with making the opportunities and activities more appealing and inviting to these populations, the outdoor industry and the outdoor experience need to be taken to where those populations currently exists. In other words, maybe the outdoor industry has a problem with its geography gap.

Let’s face it, the hubs of human-powered outdoor recreation and the outdoorsy cities and towns we cherish, particularly in the West, are generally as white as the snow that falls at the higher elevations there. Across the United States, and both urban and rural areas, Black people account for just more than 13 percent of the U.S. population, according to U.S. Census figures. The U.S. state with the highest proportion of Black people is Mississippi (37.3 percent), show 2010 U.S. Census figures, the most recent compiled by state. At the bottom among U.S. states is Montana, which is about 0.7 percent Black. The median across all 56 U.S. states and territories is 8 percent.

Yet regularly, our industry holds its events, gatherings, conferences and consumer mega-festivals in states ranked very low on the list in terms of percentage of Black residents. Colorado, for instance, home of the outdoor industry’s largest trade show, ranks 36th with just 4.3 percent of its population being Black. The city of Denver is better, at 9.5 percent, but still well below the 13 percent national average. Likewise, the outdoor industry’s major trade association and largest media company both call Boulder, Colo., home, where only about 1 percent of the population is Black. Much of a trade association’s work is done in Washington, D.C., where Indigenous and People of Color make up well more than half of the citizenship and Blacks represent about 50 percent of the population. It would seem Washington D.C. is a reasonable place for a lobbying and public opinion-based organization to set up a headquarters, where it would also find an abundance of Black candidates for employment and engagement.

Indeed, it’s no secret. By and large, the cities and towns that tend to host clusters of outdoor brands and manufacturers and that boast thriving outdoor communities largely reside in states with very low rates of Black residency. An analysis of the outdoor brands and vendors listed in the Inside Outdoor 2020 Outdoor Industry Directory, for instance, found just more than 80 outdoor brands in Oregon (ranked 44th among U.S. states and territories with 2 percent Black population). That’s more outdoor companies than are listed in the five states with the largest percentage of Black residents all combined (Mississippi, Louisiana, Georgia, Maryland and South Carolina). Both Montana (ranked 54, 0.7 percent) and Wyoming (ranked 45, 1.3 percent) are home to more outdoor brands than Alabama (27 percent Black residents) despite the fact that Alabama’s overall population is more than four times larger than Montana and more than eight times larger than Wyoming.

Even more shocking, the more than 60 outdoor companies headquartered in the city of Boulder alone is greater than the number of outdoor companies listed in the entire state of Florida (ranked 13th, 16 percent Black) and more than Alabama, Tennessee (12th, 17 percent), Virginia (11th, 20 percent) and Arkansas (14th, 16 percent) all combined. Keep in mind, those four states are home to more than 23 million people. Boulder’s population is just more than 106,000.

In other outdoorsy cities such as Salt Lake City, Utah; Boise, Idaho; Bozeman, Mont.; Stowe, Vermont; and Jackson, Wyo., Black populations make up anywhere from as little 2.6 percent to 0.09 percent.

Even California, the home to more than 400 outdoor vendors and brands, by far the state with the most, ranks 31st among all U.S. states and territories with less than 7 percent of its populace being Black. Utah, which is home to more than 200 outdoor brands and the former home of the Outdoor Retailer expos, ranks 46th.

Of course, it’s not surprising that outdoor communities and organizations set up camp in places that have close proximity to the nation’s best and most beautiful outdoor gifts. On the other hand, does a prospective Black employee, enthusiast or influencer have to move to an overwhelmingly white town, far from familiar neighborhoods, restaurants and cultural and social ties, in order to join the “outdoor lifestyle” and immerse in an outdoor community?

The good news is, the vast majority of U.S. residents make their homes within a daytrip’s drive of a backcountry experience or wide open spaces, and that includes not only the Western U.S. but also huge swaths of land in the South and Southeast. Of course, too many people lack the accessible transportation to reach these therapeutic places, but many, if not most, places in America are a daytrip’s distance to quality outdoor recreation.

Consider Alexandria, La., total population 45,800. Alexandria sits a daytrip away from Kisatchie National Forest to the north, the Sabine and Angelina National forests to the west, the Homochitto National Forest and Mississippi river to the east and numerous wildlife refugees all around. Together those natural resources offer millions of acres open to hiking, camping, biking, paddling, fishing, backpacking, wildlife watching, hunting and much more. Alexandria’s populace is more than 55 percent Black. Louisiana is the state or territory with the fourth largest percentage of Black resident, at about 32 percent.

In Knoxville, Tenn., (population 191,000) where nearly one in five residents is Black, nearby outdoor recreational opportunities rival most any place in the West. In addition to the countless playgrounds along the neighboring Blue Ridge Mountains, there is a jewel of the National Forest system sitting just to the north in Kentucky’s Daniel Boone National Forest. Mount Michel, N.C, the tallest peak in the Appalachian Mountains (6,684 ft.) is only about two and half hours by car.

Much the same could be said for nearby Chattanooga, Tenn., (population 184,000), where about a third of residents are Black, as well as Greenville, S.C., (population 71,000), where Blacks make up more than a quarter of the city’s residents.

Consider the state of Mississippi, the U.S. state with the highest proportion of Black residents. Mississippi is home to six National Forests making up 1.1 million acres that offer rolling hills in the upper Coastal Plain, flat piney woods and bottomland hardwoods. These lands host 2,000 acres of lakes, 600 miles of streams, 14 wildlife management areas, a National Scenic River and two National Recreation Trails serving up 60 miles for hikers to explore the piney woods. More than a few of the national lands are a short drive from the city of Jackson, Miss. (population 160,000).

Certainly, a city the size of Atlanta has the infrastructure and resources to host a large outdoor industry gathering. National Forest lands are within an hour to an hour-and-a-half drive in just about every direction. Finding places to play might not be as quick and convenient as, say, a Salt Lake City or a Denver, and attendees might have to Uber to their hotel rooms and VRBOs, but maybe those are small sacrifices to make. 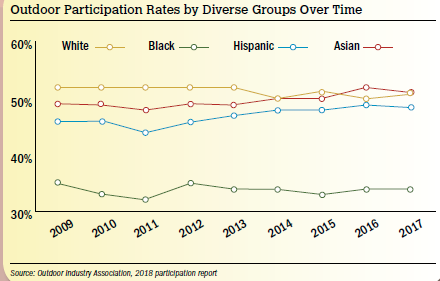 Already, one state in the southeast is emerging as its own regional hub within the outdoor industry. North Carolina is home to nearly 100 outdoor recreation companies, suppliers and organizations, ranging from smaller niche brands such as Hurricane Kayaks in Warsaw, and Misty Mountain Threadworks in Banner Elk, to larger players such as Nester Hosiery in Mt. Airy to major vendors such as Implus, located in the city of Durham, and Unifi in Greensboro. According to the Economic Development Partnership of N.C., the outdoor recreation industry employs more than 260,000 people across the state and generates $28 billion annually in consumer spending. In January of 2018, North Carolina become the eighth state to establish an official state-funded office of outdoor recreation with the naming of a Governor-appointed director of its new Outdoor Industry Recruitment Office.

And nestled in the shadows of the Blue Ridge Mountains, outdoor destination Asheville, N.C., is home to the Outdoor Gear Builders of WNC (Western North Carolina), the first gear builder association of its kind in the outdoor industry. Celebrating its seventh year in existence, Outdoor Gear Builders has grown to more than 50 members, including such names as Astral, Diamond Brand, ENO, Farm to Feet, Kitsbow, Sport Hansa, Sylvan Sport and Watershed. Asheville is also the home of influential outdoor specialty retail buying group Grassroots Outdoor Alliance, as well as rep group 360 Adventure. Asheville also is the host of the annual Outdoor Economy Conference, which takes place in October.

The state of North Carolina, it should be noted, ranks 9th among U.S. states and territories in terms of percentage of Black population, at 22 percent. It’s also among the states with the most overall Black residents, with more than 2.6 million.

This article originally appeared in Inside Outdoor’s Summer 2020 issue. 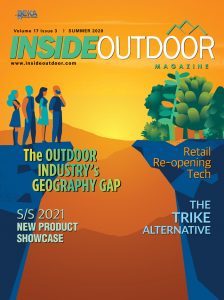