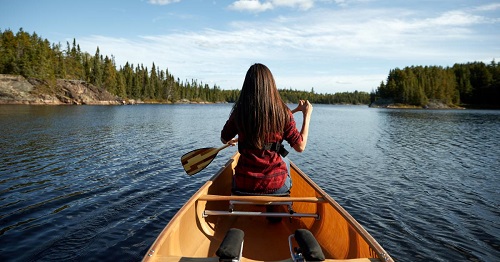 The Conservation Alliance (TCA), a leading conservation group organizing businesses to protect land and water, announced its Advocacy Priority Campaigns for 2022. In addition to its grants, TCA will invest advocacy resources in four priority campaigns: the protection of the Boundary Waters in Minnesota (pictured), the Dolores River in Colorado, Bristol Bay in Alaska, and Castner Range in Texas.

Each campaign addresses resolving competing demands for natural resources, adapting to a changing climate, recognizing the rights of Indigenous communities and protecting habitat in places that are also valued for human recreation.

In collaboration with its grantees, TCA identifies land and water conservation opportunities that are urgent, vital and need national attention. This year, The Conservation Alliance will work with members of its inaugural Confluence Program as well as members of its flagship multi-year grant program to secure permanent protection of these under-threat natural spaces.

“From Bristol Bay, Alaska to the Castner Range in Texas, these priorities include iconic lands and waters that drive the American economy,” said Shoren Brown, interim executive director of TCA. “People from all walks of life depend on these places to sustain their culture, find a moment of calm in an increasingly busy world, and earn a living. The Conservation Alliance brings a unique approach to conservation. We combine our partnerships with local organizations and direct grants to grassroots organizations with the power of our 275 member businesses to get results on the ground.”

Here is a recap of each program:

Bristol Bay, Alaska – Home to the world’s largest wild sockeye salmon run, Bristol Bay provides more than 15,000 jobs and generates $2.2 billion annually from the commercial fishery that feeds Americans. Each year tens of thousands of anglers and visitors are drawn to its extraordinary beauty and abundance. However, the proposed Pebble Mine would produce billions of tons of contaminated waste, which could destroy the region’s salmon habitat and permanently impact the many communities and industries that depend on it. For advocacy efforts, the TCA has partnered with the United Tribes of Bristol Bay, a Tribal consortium of 15 federally recognized Tribes in Bristol Bay, representing more than  80 percent of the region’s population.

Castner Range, Texas – Castner Range is a mountainous 7,000 acres located between city neighborhoods and Franklin Mountains State Park in the majority Latinx community of El Paso. Renowned for its annual display of blooming Mexican Yellow Poppies, Castner Range has exceptional cultural, ecological, and historical values. For years, the community has sought to protect the area to better access and enjoy the beautiful space. Protecting Castner Range will bring greater balance between the developed areas and natural landscape in one of the nation’s lowest per-capita household income urban areas. In this campaign, TCA partners with the Nuestra Tierra Conservation Project and Monumental SHIFT with multi-year funding for two National Monument endorsement campaigns: Avi Kaw Ame, or Spirit Mountain, in Nevada and Castner Range in Texas. Monumental SHIFT Coalition is a collaborative network of racially and ethnically diverse leaders working to shift the traditional conservation movement to represent and honor lands and places sacred to its communities better.

Dolores River, Colorado – The Dolores River begins high in the San Juan Mountains of southwestern Colorado and flows 230 miles until it joins the Colorado River in Utah’s red rock desert near Moab. McPhee Dam and Reservoir were built in the 1980’s to support the agricultural communities in the region, and to provide much-needed water for the Ute Mountain Ute Tribe in Towaoc. However, a changing climate and prolonged drought means that for decades the reservoir has not had enough water to meet the needs of agriculture, community drinking water, recreation and habitat for native wildlife. The Conservation Alliance will join groups advocating for protection of the lower Dolores River through a bill to designate a 75,000-acre National Conservation Area spanning from the base of McPhee Reservoir to the San Miguel/Montrose County line, which includes more than 70 miles of the Dolores River, establishes the Ponderosa Gorge Roadless Area, and protects special river values. TCA partners  with Dolores River Boating Advocates to promote responsible recreational use and balanced flow management of the Dolores River, while it works to protect the watershed for the health of the natural environment and the livelihood of future generations. The Conservation Alliance has been a proud supporter of Dolores River Boating Advocates since 2020.

For complete information about The Conservation Alliance, visit www.conservationalliance.com.