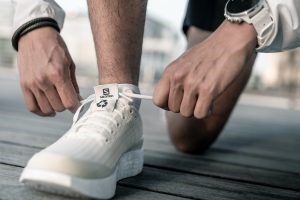 Salomon officially unveiled its Index.01, a “ready-to-recycle” performance road running shoe. The shoe is the result of three years of research and development at Salomon’s Annecy Design Center in the French Alps, developed to reduce material waste and lessen the environmental impact of footwear by using circular life cycle principles. The Index.01 is set to be released in Spring 2021.

The Index.01 was inspired by Salomon’s Concept Shoe, which was introduced in late 2019 as the first step in the brand’s recycled shoe program. The new Index.01 is built using a recycled polyester upper and a thermoplastic polyurethane (TPU) bottom unit, which are recycled separately at the end of the shoe’s life. The upper will be reused in fabric creation, while the bottom unit will be ground down and reused for a variety of purposes depending on the region, said Salomon. Specifically in Europe, the recycled bottom units will be used in the production of Salomon alpine ski boots. In addition to being recyclable, the shoe is also made of entirely recycled materials.

In late 2019, Salomon unveiled a concept shoe made completely from thermoplastic polyurethane (TPU) that could be ground into tiny pieces at the end of its life and subsequently used in the creation of a Salomon alpine ski boot. As the Index.01 couldn’t likewise couldn’t compromise on performance for recyclability, a key challenge the product team faced in creating the Index.01 was finding a material for the bottom unit that was recyclable that also delivered the perfect amount of shock absorption and rebound needed for road running.

“First, we had to construct a shoe that only used two materials that could later be separated and recycled,” said Olivier Mouzin, manager of Salomon’s footwear sustainability program. “Since Salomon has incredibly high standards for its products in terms of fit, performance and durability, we then had to make sure that those two materials would allow us to construct a shoe that delivers high quality for every day road running.”

Salomon found its solution in a nitrogen-infused, TPU-based foam called INFINIRIDE, which can be ground into tiny pieces and recycled when the shoe reaches the end of its life. The Index.01 product team incorporated the INFINIRIDE technology into the bottom unit and then developed a construction in which the materials of the upper and bottom units could be separated and recycled after use. They then used a water-based glue and recyclable polyester thread to connect the two units to minimize material contamination.

In an effort to minimize transportation impact and to streamline the recycling process for the consumer, Salomon is introducing a regional recycle process for the Index.01. At the end of the Index.01’s life, owners can simply visit www.salomon.com, print a shipping label and send the shoes to the closest collection center free-of-charge. The collection centers will be located across Europe, North America and Asia/Pacific, where they will receive the shoes, wash and dissemble them and then ship the parts to local recycling partners.

“It’s important to also be sustainable and consistent across markets in how we’re collecting the Index.01 shoes at the end of their life because we don’t want them traveling all over the planet,” Mouzin says. “That’s why, as a first step, we’ve set up collection centers in each region for consumers to ship their used shoes. From there, our recycling partners will begin the next step to recycle the used shoe materials locally. While Salomon can recycle TPU in Europe and in Asia, we had to find solutions for recycling regionally in North America, where we are unable to recycle our TPU. Localization is the key.”

The running performance of the Index.01 is driven by the plush, TPU-based foam of the bottom unit and the shoe’s R.Camber geometry, which is Salomon’s own rockered design that helps propel the runner forward with quick heel-to-toe transitions. Weighing in at just 285 grams with a 9mm drop and comfortable molded sockliner, the Index.01 is a comfortable, quiver-killing road running shoe in its own right, said Salomon making its recyclability an added bonus for runners in search of their next shoe.

“Salomon’s unique expertise across multiple sports categories, coupled with a passion for the environment has led to the development of this exciting new shoe. When the Salomon Index.01 was presented internally, the audience burst into spontaneous applause as the dream of a performance Salomon running shoe that is fully recyclable became reality,” said Salomon president, Michael White.

Salomon is also taking measures in its packaging to reduce waste by eliminating extra hangtags and stuffing paper in Index.01 boxes. Beginning spring 2021, all Salomon footwear will use FSC certified packaging to ensure that all packaging materials come from sustainable and legal sources, said Salomon.