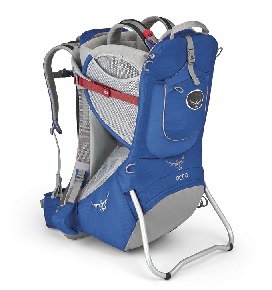 Osprey announced a recall of its Poco child carriers. According to the company, a child seated in the carrier can slip through the leg openings, posing a fall hazard to children. The recall involved about 82,000 units sold in the U.S. and about 5,700 sold in Canada.

Following is from the official release from the Consumer Products Safety Commission.

This recall involves all models of Poco, Poco Plus and Poco Premium child backpack carriers manufactured between January 2012 and December 2014. The nylon child carriers were sold in three colors: “Romper Red,” “Koala Grey,” and “Bouncing Blue.” They have a metal frame and a gray padded child’s seat inside. The production date is stamped on a black label sewn into the interior of the large lower zippered compartment on the back of the carrier. Recalled carriers have a production date code of S12SBPR1, S12SBPR1B, S12SBPR2, S12SBPR3, S12SBPR4, F12SBPR1, F12SBPR2, S13SB IPO, S13SBPR1, S13SBPR2, S13SBPR3, S13SBPR4, F13SBPR1, F13SBPR2, F13SBPR3, S14SBPR1, S14SBPR2, S14SBPR3, S14SBPR4, S14SBPR5. “Osprey” is printed on the fabric above the kick stand. The model name is printed on the back at the bottom.

Osprey has received four reports of children falling through the carrier leg openings, resulting in one report of a skull fracture and one report of scratches to the head.

REI and specialty outdoor stores nationwide and online at Amazon.com from January 2012 to December 2015 for between $200 and $300.