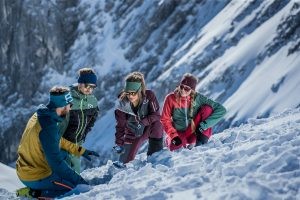 “A few years back, when ski touring really began to take off in the U.S., Tom Mason, brand manager for ORTOVOX in the U.S., began to notice a substantial problem with outdated transceivers being sold back into the growing community as more seasoned users updated their equipment.

Updating rescue equipment is a good thing, and if we could incentivize the retirement of old units, even better,” said Mason. “New backcountry skiers and riders are best equipped with the latest available avalanche rescue technology. A ‘vintage’ avalanche beacon should not be a ‘ticket’ into the backcountry.”

This is a serious safety concern that must be addressed, continued Mason, particularly as participation in backcountry sports continues to rise. “With avalanche education and protection at the core of ORTOVOX values, we knew we needed to take action. From there, the Beacon Retirement Program was born,” he said.

ORTOVOX’S Beacon Retirement Program incentivizes consumers to turn in their old beacons and to replace them with a current model by offering a $75 credit with participating ORTOVOX retailers. Beacons can be traded for a credit towards the ORTOVOX 3+, which is an intuitive, three-antenna digital avalanche transceiver witha digital processor and patented smart antenna technology. Traded beacons will be collected by ORTOVOX and recycled.

“Along with developing much of the safety equipment that is now considered standard — like transceivers and backcountry-specific backpacks — ORTOVOX also plays a prominent role in the avalanche education community,” said Greg Mears, U.S. inside sales manager for ORTOVOX. With the anticipation of one of the busiest backcountry touring seasons ever, ORTOVOX will hold two Avalanche Safety Night events here in the U.S.

“Whether you’re a seasoned backcountry expert or stepping into the backcountry for the first time, it’s important to have the in-depth knowledge about reducing risk and rescuing partners,” said Mears. “These Avalanche Safety Nights, along with the ORTOVOX Safety Academy and the Beacon Retirement Program, will help equip all users with necessary knowledge.”

Click here to learn more about the Beacon Retirement Program.