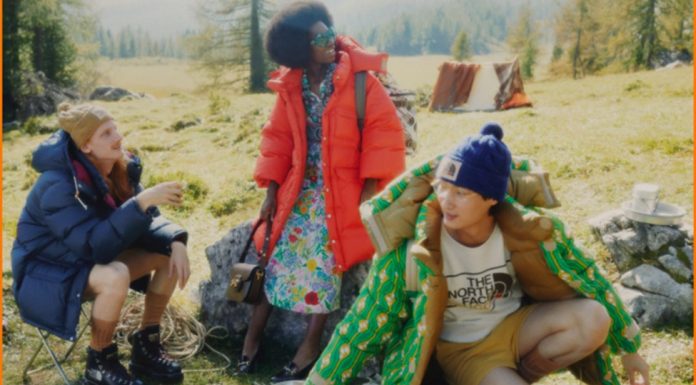 The North Face x Gucci collection celebrates the histories and heritage of both brands. After three months, the two companies are unveiling the results of their collaboration, which was first teased in September.

To promote the new partnership, Gucci’s creative director Alessandro Michele conceived a campaign shot by Daniel Shea and set in the Alps. In stills and video, as well as through content created for TikTok, the images portray a group of hikers camping by lakes and enjoying an outdoor vacation. The photos have the quality of retro holiday snaps, with a Seventies mood.

The North Face was founded in 1966 in San Francisco, and the atmosphere of the campaign reflects the period when the company began its development from an outdoor retailer based in Berkeley, Calif., and shared a factory and storefront adjacent to Credence Clearwater Revival’s practice studio.

The group’s iconic song “Bad Moon Rising,” written by John Fogerty, serves as the soundtrack throughout the video campaign.

The collection for men and women includes ready-to-wear, soft accessories, luggage and shoes, but also tents and sleeping bags – a reference to the outdoors expertise of The North Face. The collection also features goose-feather down-padded coats, bombers, vests, shirts, skirts and jumpsuits.

Outerwear and equipment are based on original designs from The North Face in the Seventies.