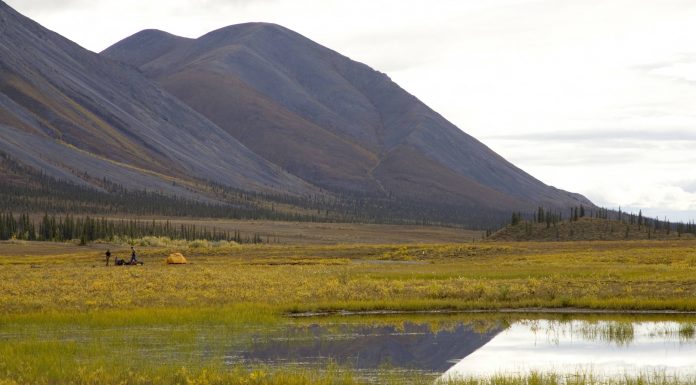 Yesterday, Colorado community members, businesses and indigenous leaders spoke out against plans to sell off the Arctic National Wildlife Refuge for oil and gas development. In December of 2018, The Bureau of Land Management (BLM) released a draft environmental impact statement (DEIS) in preparation for holding an oil and gas lease sale on the ecologically sensitive coastal plain of the Arctic Refuge. The DEIS comment period is open until March 13, and only one official public hearing was held in the lower 48 despite repeated requests from indigenous peoples, conservation organizations, and others.

The Denver Community Hearing allowed community members to comment on the DEIS. It was hosted by a representative of the Gwich’in Nation, conservation organizations, veterans, scholars, members of Congress as well as “Welcome to Gwichyaa Zhee”  Diné filmmakers Greg Balkin and Len Necefer. A similar hearing was held in Albuquerque on Tuesday.

“Welcome to Gwichyaa Zhee” is a film that chronicles the efforts to protect the Arctic Refuge and its parallels to Bears Ears National Monument. A film screening and Q&A with the filmmakers was held at Patagonia Denver after the hearing.

Len Necefer, who is also the Founder and Owner of Natives Outdoors said, “I’ve watched the concerns of my community get brushed aside in favor of fossil fuels my entire life. It feels like in policy makers’ minds there aren’t many people in places like the Arctic Refuge and Bears Ears, so destroying our homelands at the expense of our Indigenous livelihoods is worth it. At what point will people stand up for us, too?  We want to tell our children that we did everything we could to protect these places.”

Bernadette Demientieff, Executive Director of Gwich’in Steering Committee, said, “Are our children and our future generations going to be able to see our beautiful land, our mountains, and our trees? In a hundred years, are they going to have all we have now? Or is that all going to be destroyed? I don’t want my kids to be struggling to survive some day because I didn’t take a stand.”

“As a former US Army sniper and the son and grandson of war veterans, I find it despicable that the Trump Administration is opening the Arctic National Wildlife Refuge to oil and gas drilling without allowing the public to give testimony at widespread official hearings. The Arctic Wildlife Refuge represents the epitome of the lands-of-the-free that veterans swore an oath to protect. To deny multiple open hearings for public input is a disgrace to the democracy veterans fought and sacrificed for,” said Garett Reppenhagen Rocky Mountain Director, Vet Voice Foundation.

Boulder-based Lindsay Bourgoine, Director or Policy and Advocacy with Protect Our Winters, said, “The BLM’s proposals turns a blind eye to the fact that the Arctic is ground zero for climate change, with temperatures in the region rising at twice that of the rest of the world.”

Sarah Tingey, Co-Owner and Outreach & Operations Director of Colorado-based Alpacka Raft who manufactures packrafts that are used by customers to traverse the Refuge, said, “I’m from Alaska and I’ve had the privilege of exploring the Arctic Refuge. The Administration’s process is not allowing sufficient time to gather and analyze scientific data, examine the negative impacts drilling would have on the landscape and wildlife, or hold meaningful discussions with the local communities and other stakeholders. Once America’s last great wilderness is opened to drilling, the impacts will last for generations.”