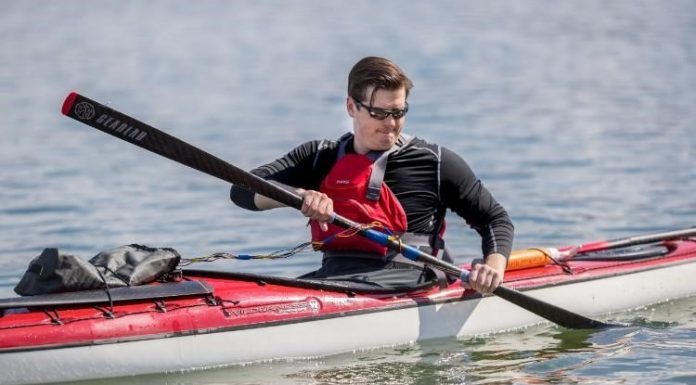 Gearlab, which introduced the first modern Greenland-style paddles with exchangeable tips, has partnered with engineer Declan Nowak to develop a mechanism to measure the forces on a carbon fiber Greenland-style paddle in the water, allowing Gearlab designers to increase paddle strength and efficiency, said the company

“In the industry, there is no set standard for testing stress placed on the paddles,” says lead designer and co-founder, Henry Chang. “All Gearlab products go through systematic and rigorous research, usability analysis, and ﬁeld testing. As part of that process, we needed a way to measure how much force is in each stroke and determine the strength-to-weight ratio.”

In consultation with engineers at Gearlab’s design laboratory in Taiwan, Nowak designed an Arduino-powered sensor that records the force exerted by a paddler’s hands on a paddle. An Arduino is a small lightweight microcontroller that is perfect for data-recording applications because it records information to an SD card.

“Using the sensor, I was able to determine the maximum force a paddler is likely to apply in ideal paddling conditions,” Nowak explains. “By knowing the stress a paddle can withstand in controlled lab tests and what the average force of a paddle stroke is, Gearlab can ensure that every paddle will handle tough conditions and meet customer expectations.”

As a result of this collaboration, Gearlab applied these results in developing the new Kalleq paddle (from the Inuit word for lightning) to be released this spring. The Kalleq has a redesigned internal carbon fiber structure that offers greater strength and durability in harsh conditions than previous models. And Gearlab’s signature exchangeable tips are smaller and the blade slightly wider than previous models.

﻿With these innovations, the user can go farther and faster, with less stress to the shoulder and arm joints. The tests ensure that as the paddles become lighter, they maintain Gearlab’s rigorous durability standards.

*To simplify the graph, no data is recorded when the sensors registered a force of zero.

Nowak says the next step will involve refining the sensor system and analyzing paddle strength using computer models in various water conditions. He also plans to put the new flagship Kalleq paddle to further tests this summer with Gearlab’s chief engineer, Chung-Shih Sun, on a 740-mile expedition on the historic Northern Forest Canoe Trail through the Northeastern United States and Canada.

﻿In the future, Nowak aims to work with Gearlab to establish a universal metric for paddle companies.