Switzerland-based Dahu Swiss has introduced a modular design that the company said “reimagines the ski boot.” It consists of a Grilamid plastic shell featuring a series of strategic cutouts, a Corsair entry and an Italian-made inner lace-up Cambium boot liner that’s “unlike any ski boot liner on the market,” said Dahu.

Starting in the late 1980s, industry veteran Clark Gundlach was an integral part of the disruptive rise of snowboarding. Working alongside Jake Burton, Gundlach helped to not only develop the pioneering brand into an industry juggernaut, but he also helped to usher the sport of snowboarding from rebellious upstart to wildly popular global winter sport. After 22 years breaking ground at Burton, Gundlach has founded another disruptive product in the Dahu Swiss Ski Boot.

“It’s been a long time since we’ve seen true innovation in the ski boot business,” says Gundlach, who, as Dahu USA’s president, is teaming up with like-minded industry veterans on the project including Maurizio Molin, renowned designer who also worked for two decades at Burton.

Designed in Switzerland, the Dahu boot has a pivotal hinge design like nothing seen before in an alpine ski boot. The Grilamid shell features carefully engineered cutouts eliminating pressure points and the Italian-made inner Cambium boot liner is designed for performance, warmth and comfort. The Dahu boot introduces a precisely engineered Corsair entry system, with hinges at the front and back of the boot.  The skier has two options, either step into the insulated Cambium liner, lace it up, and then step into the shell or leave the liner in the boot and step in, as a single unit, like a conventional Alpine setup. 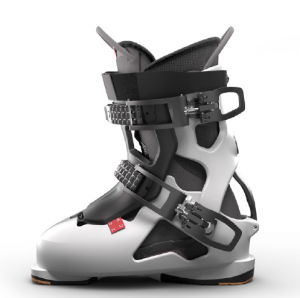 Either way, Dahu boots are easy to get in and out of, said Gundlach. The innovative boot will also let skiers step out of the shell and walk around comfortably in the liner boot alone, a distinct advantage over alpine boots.

“After thousands of days on the mountain, I know what an uncomfortable boot feels like. This product has the potential to revolutionize the ski boot business,” says Gundlach. “It’s an innovation that the industry deserves. I’m excited about that. A pain-free ski experience will bring joy to every vertical foot of your day.”

Gundlach recalls how Burton and other snowboarding companies challenged the establishment at the industry’s annual snow trade show. During those early years, every season was an evolution in every product, from boots to boards to bindings. “Both the design teams and the riders were continually innovating,” says Gundlach. With Dahu, Gundlach is bringing that same excitement to the ski side of the business, he said.

Headsweats Supports Retail Accounts with Give Back Credit→