As little as a few years ago, most holiday shoppers felt that if they hadn’t ordered an item online by December 19, it was too late to get the gift by Christmas. Apparently, Amazon’s efforts to achieve quick delivery time by putting inventory and fulfillment centers closer to consumers have changed that perception.

On the Monday before Christmas, 49.2% of all online sales in the United States were made on Amazon, according to data from Slice Intelligence. The Seattle company’s largest share of online retail hit on Dec. 18, 19 and 20, at 47.8%, 49.2% and 48.2% respectively, according to Slice estimates. 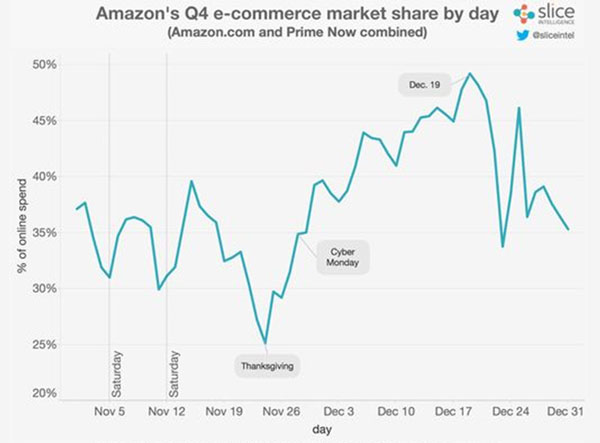 Analysts believe, in a shift taking place over the last few years, consumers were doing their shopping later, secure in the knowledge that Amazon’s two-day delivery would still get them what they’d ordered before it was too late.

“Digital has taught people they can wait to the last minute,” said Brendan Witcher, principal retail analyst with Forrester. By the final week before Christmas “consumers don’t have the time or luxury to be shopping around anymore,” he said.

“Even five years ago, if you ordered something on Monday, Dec. 19, you would have been very worried as to whether your present was going to make it on time,” he said.

Amazon Will Drive 80 Percent of Ecommerce Growth this Year→