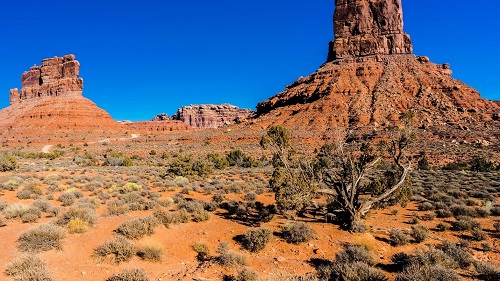 The Outdoor Industry Association said it is disappointed and concerned about the lawsuit filed by the state of Utah over the Biden Administration’s decision to reinstate the boundaries of the Bears Ears and Grand Staircase-Escalante national monuments under the Antiquities Act.

In a statement released on Tuesday, interim Executive Director Kent Ebersole stated, “We share the disappointment and concern of many regarding this unfortunate legal action by the Utah state government. Time and again, the outdoor industry has come together as one in defense of public lands and waters when they have come under threat. This time is no different. We will continue to strongly advocate for these critical federal protections for Bears Ears and Grand Staircase-Escalante to ensure that every generation of Americans – present and future – are guaranteed access to these special places.”

The battle over two National Monuments in Utah ramped up again last week, when the state and two of its counties filed a lawsuit that seeks to block  Biden’s restoration of Bears Ears and Grand Staircase-Escalante, five years after former President Trump reduced the size of each in 2017.

Filed in U.S. District Court in Utah, the state argues that Presidents Bill Clinton and Barack Obama’s creation of the monuments in 1996 and 2016 respectively, as well as Biden’s restoration of them in 2021, were “an abuse of the President’s authority under the Monuments and Antiquities Act,” and that the text of the Act only authorizes the President to create small, narrowly-drawn monuments to protect specific historic structures and artifacts.

In a joint statement released when the suit was filed, Utah Gov. Spencer Cox and Utah’s congressional delegation argued that far from protecting delicate landscapes, the monuments’ designations had put them in danger.

“The vast size of the expanded Bears Ears and Grand Staircase-Escalante National Monuments draws unmanageable visitation levels to these lands without providing any of the tools necessary to adequately conserve and protect these resources,” stated the letter’s signatories, who included U.S. Senators Mitt Romney and Mike Lee.

The lawsuit is the latest in a decades-long fight over two of America’s most controversial monuments. Clinton designated Grand Staircase-Escalante National Monument in 1996, establishing significant protections for 1.7 million acres of land, which later expanded to 1.87 million. Besides protecting Ancestral Puebloan dwellings and backpacking trails, the monument is home to several endangered species, including the California condor. Paleontologists working in the area have discovered 21 new species of dinosaurs, as well as an 81-million-year-old Tyrannosaurus, believed to be the oldest ever uncovered.

Bears Ears’s designation came near the end of Obama’s second term, when he established the monument in consultation with five Native nations with ancestral links to the area. The monument contains an estimated 100,000 sites of significance to the nations, including dwellings, pottery, and burial sites; under an agreement formalized earlier this year, the five tribes — the Hopi Tribe, Navajo Nation, Ute Mountain Ute Tribe, Ute Indian Tribe of the Uintah and Ouray Reservation, and the Pueblo of Zuni — co-manage the monument along with the Department of the Interior.

The monuments became targets for the state government and congressional Republicans, who portrayed them as a federal land grab enacted over the objections of Utahns. In response, Trump slashed the size of Bears Ears by 85 percent and Escalante by about half, marking the largest reduction of public land protections in history and opening the territories’ doors to activities such as mining and oil and gas exploration.

The reaction from wilderness and conservation groups has been swift. In a statement, Southern Utah Wilderness Alliance Director Scott Groene called Utah’s political establishment “the most hostile to America’s public lands, of any state,” and suggested the state had ignored locals’ wishes in battling against Bears Ears.

“Once again, Utah’s political leaders are running roughshod over those who live closest to Utah’s national monuments — especially the Tribes that have lived here since time immemorial,” wrote Groene. “This lawsuit further ignores the local elected officials in Grand and San Juan Counties, where Bears Ears is located, and community leaders in the towns closest to the Grand Staircase-Escalante National Monument, who have registered their support for President Biden’s lawful restoration of the original monument boundaries.”