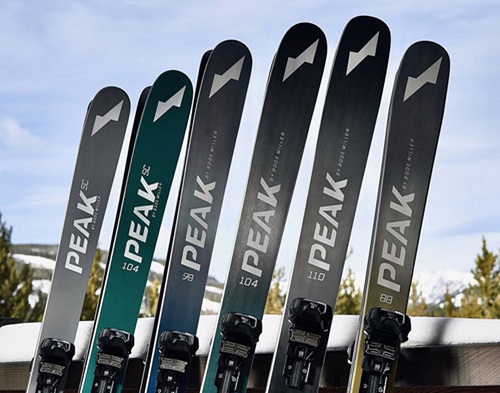 The Peak Ski Company was co-founded by Miller, who will be Peak’s Chief Innovation Officer and Wirth, Peak’s Chief Executive Officer, a respected executive with global experience in the mountain resort sector, including commercial and retail operations and technology platform development.

The company developed its first prototypes and had a team of respected ski testers led by 30-year veteran ski tester David Currier (Skiing, Outside, Mountain), review the skis.

The lineup of skis for 2022/2023 includes four models of Peak by Bode Miller skis, predominantly for front country skiing, with each model delineated by the measurement (in millimeters) underfoot: The Peak 88; The Peak 98; The Peak 104, and the Peak 110.

The 2022/23 Peak by Bode Miller skis and Peak SC by Bode Miller skis will be priced at $890 and exclusively available through peakskis.com. Based on the finite number of the company’s 22/23 line of skis, Peak Ski Company has developed a special reservation program including a fully refundable $50 deposit, allowing customers to lock-in the desired model and length of Peak skis well ahead of the 22/23 season.