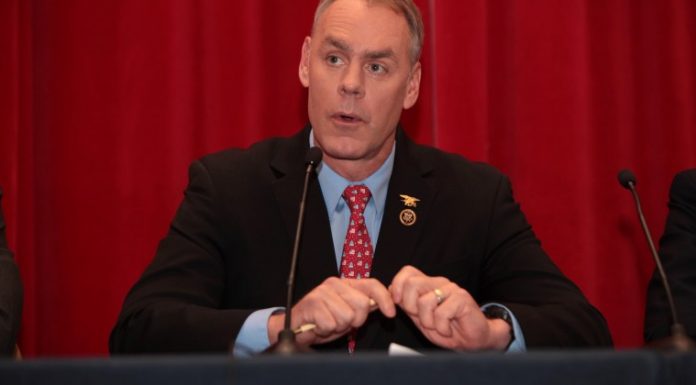 Congressman Ryan Zinke (R-MT) was confirmed by the U.S. Senate as the 52nd secretary of the Department of the Interior (DOI) and the choice is supported by the Outdoor Industry Association.

OIA said it supported Congressman Zinke in his 2016 re-election race for Montana’s at-large Congressional seat and supported his nomination as DOI secretary to key senators in the U.S. Congress. Following is the official release on the matter from OIA:

“OIA congratulates Secretary Zinke on this new role, and we look forward to working closely with him and his staff at Interior to promote the fundamental role of America’s public lands and waters to the $646 billion outdoor recreation economy,” said Amy Roberts, OIA’s executive director. “We appreciate Secretary Zinke’s commitment to ensuring all Americans have access to their public lands system, and we look forward to supporting his efforts to preserve policy tools that keep protections for public lands in place.”

On January 17, Zinke testified before the Senate Energy and Natural Resources Committee and reaffirmed his commitment to keeping public lands public, reauthorizing the Land and Water Conservation Fund and supporting recreation and sportsmen access. He also mentioned the need for recreation infrastructure to be part of a broader infrastructure package and prioritizing the National Park Service $12 billion maintenance backlog when he takes office.

When questioned by Senator Bernie Sanders about climate change, Zinke responded, “…It (climate change) is not a hoax,” and he discussed his years spent outside Glacier National Park, including a vivid experience witnessing first-hand as Grinnell glacier receded over the course of a few hours. While Zinke did acknowledge the Trump administration’s desire to increase energy development, he explained that it will be an “all-of-the-above” strategy, including wind and solar energy.

Another key point he made during his testimony was that recreation and mining don’t always have to be in conflict and that sound science and data on the consequences of extraction will be key to his resource development strategy.

OIA and industry brands responded to Zinke’s hearing with an industry letter reiterating some of the congressman’s responses that support our policy agenda and urging that he continue to work on issues important to the recreation community going forward, especially as they pertain to land protections and rollbacks of bedrock conservation tools.

You can also make your voice heard on public lands and recreation issues by writing to Secretary Zinke during his first days in office.

Although we may not be aligned with the administration on all of our issues, we are encouraged that we will be able to work together with Secretary Zinke to grow the recreation economy, preserve our iconic outdoor places and protect our shared national heritage.