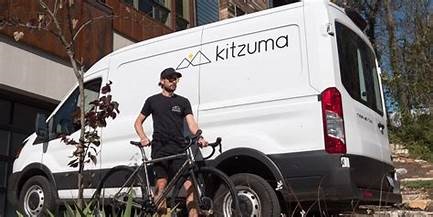 Only a few months after its official launch – and well ahead of schedule due to high demand – Kitzuma Cycling Logistics will begin offering national coverage on January 25 with its fully-built, ready-to-ride bike shipping service.

After operating a successful pilot program in the eastern half of the country with a major multi-brand bike group, Kitzuma begins shipping nationwide next week with that client. Another new client, a renowned bike brand based in Utah, is under a pilot program that will go national as well.

While delivering east of the Rockies over the last few months, Kitzuma has been building the framework for a hub-and-spoke-based national network, and it is ready to roll it out. A handful of major hubs spread across the country, working in conjunction with regional hubs that will ‘spoke’ out from there, will give Kitzuma efficient access nationwide.

“Starting next week, Kitzuma trucks can pick up a bike from a manufacturer’s dock in, say, California and deliver them through our network to a customer in Boston,” said Taylor Essick, Co-Founder/CEO. “And of course, that works vice versa or anywhere in between. As we actively onboard new clients across the country, we’ll be ready to handle their needs no matter where they do business. And in most cases, the entire process takes a total of just 3-6 days at a similar cost to the big-name shippers.”

“What we offer takes the uncertainty of a middle man and shipping bikes in cardboard boxes out of the equation,” Essick continued. “Bikes are moved via our national fleet of specially equipped vans and trucks … so only Kitzuma personnel will ever handle the products. All bikes will be picked up fully built and will remain that way through final delivery.”

Kitzuma’s model for shipping bikes, whether for B2B or B2C, is new in the industry: Traditionally a manufacturer must build up a new bike, break it down to box it up, then hand it off to a shipping company to deliver it via truck and/or air cargo. After all that the recipient must again unbox and rebuild the bike.

Equally important is the transparency of the process; the crew is regularly in touch with the shipper and receiver to ensure the best experience.