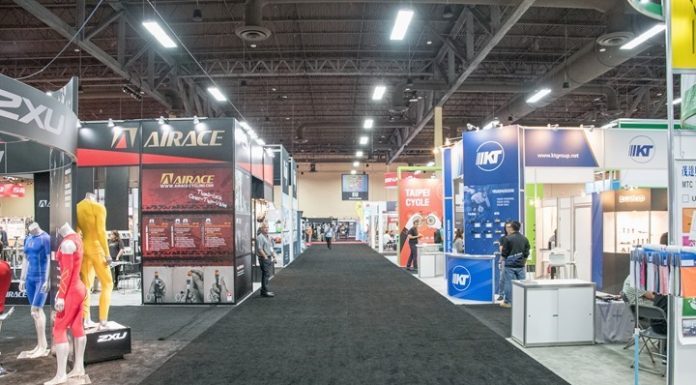 Following the demo experience, the Interbike International Trade Show will take place from Tuesday, September 18 through Thursday September 20 at the Reno-Sparks Convention Center (RSCC) just south of downtown Reno. Expo hours on Tuesday and Wednesday will be 10 am-6 pm, with Thursday being 10 am-4 pm.

The new hours will allow attendees to take part in educational content before the show opens, lessening conflict with valuable time on the show floor, said Emerald. “Interbike will be making significant additional investments in education both in morning sessions and on the trade show floor itself,” announced show organizers. All meeting room space is adjacent to the main halls which will make participation even easier.

“We’re extremely excited about this move for a multitude of reasons,” said Pat Hus, Vice President of Interbike. “For the first time in a very long time, we’ve been able to hit the reset button on Interbike and OutDoor Demo and give the industry something new and fresh that we couldn’t do in our previous locations. With the support and investment from the city of Reno we are going to be able to truly create a one-of-a-kind, week-long celebration and experience around cycling. We also recognize that this is a critical time in our industry and that we need to provide a more cost-effective approach to exhibiting at the show, and we are now able to provide that.”

“Las Vegas has been a great home and we appreciate their partnership over the years,” said Hus. “However, Reno-Tahoe gives us an unmatched blend of world-class venue for a consumer festival and the OutDoor Demo, state of the art convention center, fantastic hotel choices, robust nightlife and a more intimate environment of welcome and celebration. Cycling will be the center of attention for the Reno-Tahoe area for the entire week. The Reno-Tahoe experience will be personable, affordable and picturesque for all attendees.”

Among the “several reasons” behind the move, Emerald cited that “Reno-Tahoe will enable Interbike to have a much greater financial impact on the area as a whole, and attendees will experience an increased amount of undivided attention from hotels, restaurants, music venues and the community at large;” the low cost of hotels, food and beverages; and ideal weather conditions on September.

Lastly, Interbike said it will continue to grow and expand its retail educational content with focus on key speakers and presenters before the show opens each day at 10 am. With the increased attention on this aspect of the show, show organizers have put The IBD Summit on hiatus until further notice. Interbike will work to bring IBD Summit-level content to the show in Reno-Tahoe, continuing its track record of bringing high-level speakers to its events.