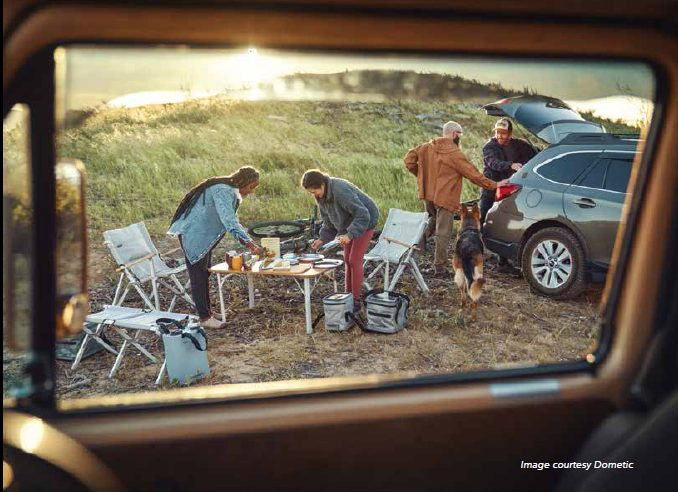 With reservable campgrounds across the country at or near capacities for the past few camping seasons, a significant number of campers are pushing deeper into forests to find their camping experience, suggest data from cView Postamping reservation service Dyrt. Campers told Dyrt it was nearly three times more difficult to find bookable campgrounds in 2021 than in years prior, while nearly half of all campers in the U.S. reported difficulty finding available campsites the last camping season, with western regions being the most difficult.

Not to be deterred from scratching their outdoor itch, “Campers met the campground shortage head-on, expanding into dispersed camping,” said executives at Dyrt, whose members went dispersed camping twice as often in 2021 as they did in 2020. All the while, the four most saved campgrounds on the Dyrt platform in 2021 were all dispersed campgrounds, where campers are free to camp anywhere within certain boundaries, said the company.

And among the many campers who said they had tried a new form of camping in 2021, dispersed camping, at 23 percent, was second only to camping in a camper van (35 percent) among the several types of camping in the survey, including camping for the first time in an RV, which came in at 22 percent. 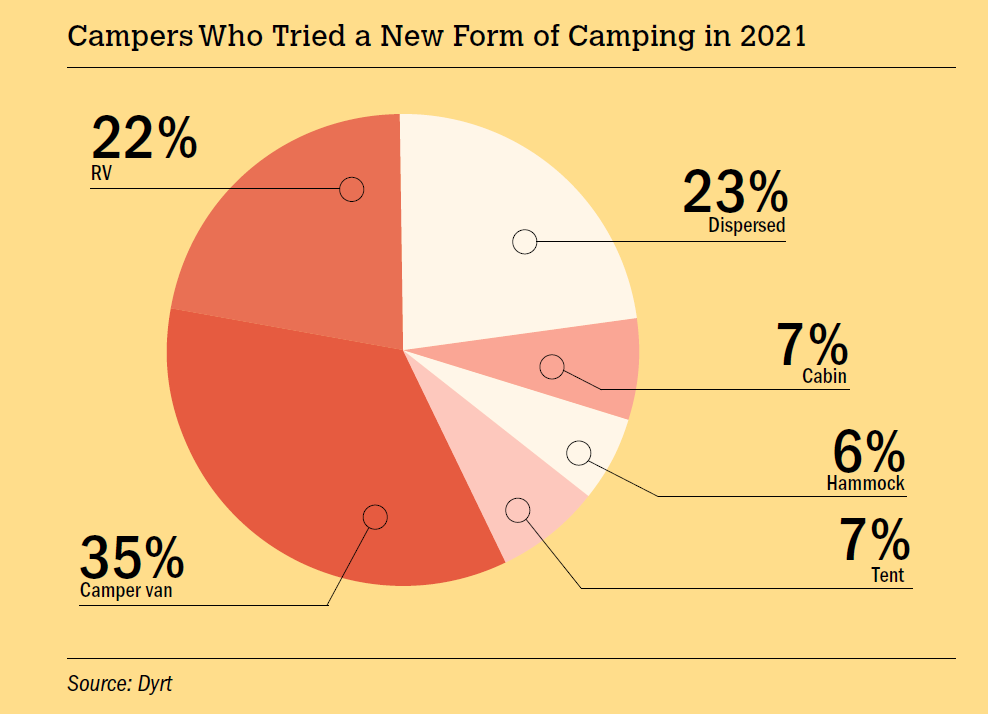 Assuming we are not about to experience a noticeable increase in the inventory of developed campgrounds, either public or private, Dyrt’s findings would seem to suggest there is an opportunity for innovation and items that serve the unique needs of the dispersed camper who may be willing to forego some of the amenities of an established campground but still requires high levels of comfort (i.e., glamping) along with some level of portability. After all, for many campers, both new and experienced, an overcrowded or near-capacity campground is not their idea of the ideal camping environment. Quite the contrary, in fact, as a plurality of campers cite the ability to escape crowds and the stresses of everyday life as a primary benefit of camping.

Consider, for instance, that while the overall incidence of camping has dramatically increased, 44 percent of campers surveyed recently by Kampgrounds of America indicated they camped less in 2021 due to overcrowded campgrounds. A similar 44 percent claimed to have “changed the way they camped” due to the entry of massive numbers of new campers, while 45 percent said that the large number of newcomers impacted the quality of the camping experience.

“These results suggest that when the camping experience is lessened due to these factors, it directly impacts the benefits of camping such as relaxing and escaping the stress of everyday life,” said KOA researchers.

New campers who experienced issues such as overcrowding, meanwhile, are significantly less likely to express interest in camping again in 2022, said KOA.

The opportunity to avoid crowded campgrounds through dispersed camping – generally described as parking along a national forest road outside of a designated campground and setting up camp within a half mile or so of the car – could be particularly appealing to the growing and increasingly important “urban camper” segment of the market.

“In 2021, the urban/city resident emerged as one of the most avid camping segments,” said KOA researchers. “This set of campers is most likely to camp frequently in terms of both trips and nights. The group is also most likely to have an increase in camping in 2021 and has every intention of camping more often in 2022.”

All the while, this over-represented group of young and urban campers, no doubt encouraged to camp during the past two years by the restrictions of COVID-19, “are inclined to say that avoiding crowds is a benefit of camping,” said KOA in its 2022 camping report.

“[T]hese campers are seeking a camping experience,” continued the report, “that allows them to escape crowding, noise and the hectic nature of life in a city – camping may become less attractive if they experience these situations during their travels.”

Much the same could be said about the massive numbers of new participants who were introduced to the activity during the pandemic and post-COVID, as half of those who have started camping within the past few years said they have camped less or changed the way they camp in 2021 due to overcrowded campgrounds and the influx of new campers. In about three-quarters of cases, new campers started camping during the past few years for reasons other than a love and appreciation of the outdoors, show KOA’s findings. One could argue that it’s easier to discover the healing power and peace of the outdoors when one is surrounded by open space and nature rather than when surrounded by other campers in a crowded campground.

And when considering that new campers are younger, more ethnically and socially diverse and wealthier than the profile of the traditional camper, retaining significant portions of COVID-inspired campers is important to the health of the market in many ways.

This article originally appeared in the Spring 2022 issue of InsideOutdoor Magazine.