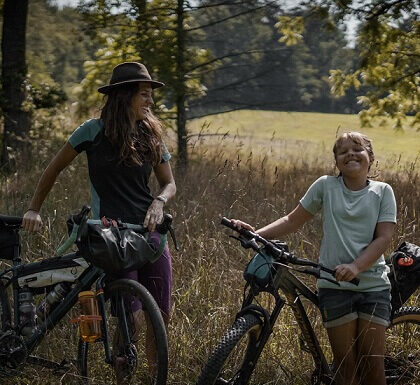 Kitsbow released “The Mysteries of Saint Anthony’s” — the third film in the 2021 36 Hours in Kitsbow series. Directed and produced by mother-daughter duo Emily and Willow Zebel of Wilder Mile Creative, this short film shares the wonders of Stony Valley – the second largest roadless wilderness tract of land in Pennsylvania.

In their 36-hour adventure, the duo uncovers some of Stoney Valley’s hidden gems and learn more of the area’s history, all while leaving a bit of mystery for the next adventure.

“I want to encourage a way of seeing that actually expands what it means to be human, and show that we don’t have to go far to find a transformative experience,” explained Emily Zebel. “It is about the inherent health of the whole, not as an abstraction, but as a lived, participatory experience. The root of ‘abstract,’ after all, is ‘out of our tracks.’

She further said, “If sustainability is to mean anything relevant, it is these tracks we have to circle back to, and put ethics into action, re-rooting to the landscape. If we look to our own backyards, to our own forests and trails and places that are relevant to us, there is a story of embodying kinship, practicing reciprocity as if the future actually matters, so that we can once again be true stewards and keepers of this earth.”

The 36 Hours in Kitsbow Film Series highlights unique, short films that tell the story of a cycling adventure undertaken in just 36 hours. This year, six grant recipients earned cash and gear from Kitsbow to help create their films.

“Kitsbow is very much oriented toward family adventures, so we were excited to see Emily and Willow in our 36 Hours in Kitsbow series,” said David Billstrom, CEO of Kitsbow Cycling Apparel. “A big cycling adventure doesn’t always mean traveling hundreds of miles; some of our greatest adventures are right out our backdoors.”

Kitsbow will roll out three additional short films in its 2021 series before the end of the year. To follow along on the adventure and learn how to get Kitsbow to sponsor your own short film in the next series, visit the Kitsbow website.