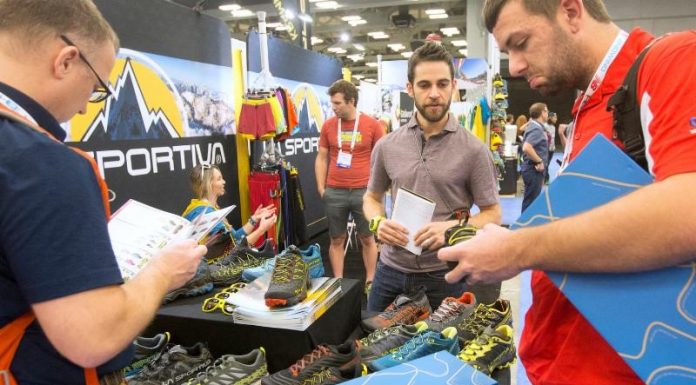 A multi-million dollar shoe manufacturing machine, several of the world’s greatest runners, and innovative running accessories made the 12th annual The Running Event (TRE) the largest ever in terms of retail attendance. A total of 2,629 industry professionals attended the conference and trade show on Nov. 28 to Dec. 1, 2017 in Austin, Texas. This represents a 3.5 percent increase in total attendance over 2016.

TRE 2017 hosted 880-plus retail buyers representing 1,000-plus retail storefronts and nearly 400 unique ownership groups, the highest number of retailers in the 12-year history of the show. Also attending: more than 50 race directors, and 53 running concierges from the Westin hotel chain.

“The running business is alive and well,” said Troy Leonard, show director for B2B publisher and trade show producer Formula4 Media, Great Neck, N.Y. “The attendance at the show is proof of the vitality of this marketplace.”

Specialty running store buyers came to Austin for conference sessions designed to help them operate more profitably, and to preview new products and services from 255 exhibitors (including 60-plus first-timers) showing the latest in footwear, apparel and accessories.

One of the highlights of the conference was an on-stage interview of Walter Robb, the former co-CEO of Whole Foods, who discussed creating a strong healthy culture in stores. Robb was interviewed by Chris Farley, owner of Pacers Running Store in the Washington, D.C. area and the voice of the “Pace the Nation” podcast.

The main topic was the many similarities between the healthy food business and the running business. “Both of us are selling a healthy lifestyle and both channels are facing intense competition,” Farley said.

In a spirited give and take, Robb defended Whole Foods high prices saying, “I never apologize for selling quality.” He also emphasized the importance of eliciting “magic and creativity” from retail sales associates.

“Retail has changed but you can remain competitive by understanding how your people (store employees) think and feel … create an environment where team members can bring forth new ideas … and can help the store come alive for customers.”

Brooks Running launched a line of custom fitted running shoes, in partnership with HP and Superfeet, while Meb Keflezighi, the most decorated American marathoner – Olympic silver medalist (2004), and winner of the New York City Marathon (2009) and Boston Marathon (2013) – received the inaugural TRE Lifetime Achievement Award. In the video documentary, The Home Stretch, shown to the audience and produced by Skechers and Meb’s brother Merhawi, he’s called, “a world class athlete with all the class in the world.”

Several of the top female runners in the world were also at TRE. Deena Kastor held court in the ASICS booth and previewed her upcoming book. Emma Coburn and Jenny Simpson made their second consecutive TRE appearance at the New Balance booth, and Krissy Moehl represented ProTec at the Friday recovery breakfast.

It wouldn’t be The Running Event without the annual Indie 5K, which this year was held at Nland Surf Park, the only surfing destination of its kind in North America. The male retail winner was Dan O’Keefe from Naperville Running Company for his 5K time of 14:46. The women retail winner was Marisa Hird, also from Naperville Running Company, with a time of 18:08.