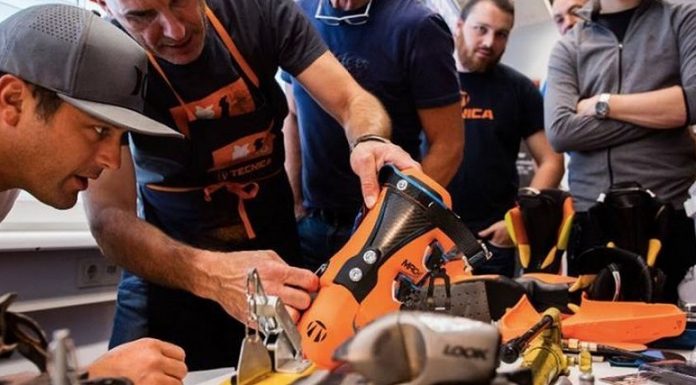 The Cortina World Championships have always had an eye on sustainability issues, which is why it will be the host at Casa Veneto the presentation of “Recycle Your Boots,” a Tecnica Group project that brings the circular economy into the ski supply chain.

Tecnica Group is a major player in the sporting goods industry, with brands such as Tecnica, Blizzard and Nordica, and the notorious Moon Boot.

Tecnica Group President Alberto Zanatta explained, “We are not simply creating and selling a product but setting up a fully-integrated sustainable process: production, transport, recycling, consumers. We have chosen to present it during the World Championship because it is a project that involves everybody.”

When an old pair of ski boots reaches the end of its useful life, at best it ends up in landfills or burned in a waste-to-energy plant. Tecnica Group has rethought this process, taking care of a process that collects, recycles and regenerates materials, to be used as components of new ski boots or for the production of other products.

The collaboration of retailers is fundamental, but also that of consumers. “We hope to involve skiers who want to contribute, with us, to reducing the environmental footprint of the skiing world,” Zanatta said. “At the same time, we have the possibility to support retailers (severely tried by lockdown and the competition with e-commerce), inviting consumers to go to stores for a good cause.”

The way it works is that any skier who wants a new pair of Tecnica ski boots can return their old ones, from any brand. Tecnica Group will then recycle the old pair in a transparent and sustainable process.

Old ski boots will be collected by retailers and transported in smart batches to reduce emissions. The Italian company, Fecam, will remove the liners and dismantle each boot to separate the plastic and metal components. All parts will be transported to the nearby Laprima Plastics plant and transformed into secondary raw materials, such as plastic granules and recovered aluminum, ready to be recast and reused in industrial production. In addition, the liners are shredded to make new padding.

Recycle Your Boots will influence the way Tecnica Group designs its ski boots in the future. The Tecnica Group’s innovation team is working to implement the use of secondary raw material from the Recycle Your Boots process in new products and new ski components, while new ski boots will be designed to facilitate the recycling process. The company also plans to open the project to other types of products and brands, even outside the ski sector.

The Industrial Engineering Department of the University of Padova is a strategic partner to the project, with two different research teams. The first one, led by Professor Michele Modesti, will deal with research and development on the innovative boot recycling process. The other one, led by Professor Alessandro Manzardo, will measure the resulting production and disposal of ski boots to evaluate their effectiveness in terms of reducing potential environmental impacts, including CO2 emissions.

The Recycle Your Boots project has applied to the European Commission’s LIFE program, the EU’s funding instrument for the environment and climate action, and is under evaluation.
Beginning this fall, the Recycle Your Boots project will start at retailers across the Alps including Austria, France, Germany, Italy, France and Switzerland. The plan also will look to include Norway, Spain and Sweden.

Tecnica Group also wants to extend the project to North America with a local recycling partner. However, the most critical element will be mobilizing the skiing community, its retailers and consumers.