As we approach a key week of the summer season, businesses are looking for warm and dry conditions to support demand for summer apparel and consumables. Outdoor activities are widely customary on U.S. Independence Day (Saturday July 4) and Canada Day (Wednesday, July 1), making these a few of the most weather-impacted holidays of the year, said analysts at Planalytics.

The run-up week (June 28-July 4) will feature seasonable to warmer than normal temperatures from the Central Plains to the eastern U.S., said the weather forecasting company. Conversely, the West will trend cooler than normal with the exception of seasonable conditions for major coastal markets. The hottest anomalies compared to normal and last year will be focused in the Northern Plains and Midwest region, while the eastern third will see a cooler comparison to summer 2019. 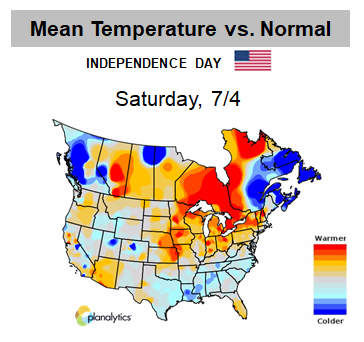 On Canada Day (Wednesday, July 1), hotter than normal temperatures with heat indices reaching the low 90s will engulf much of central and eastern Canada. Conversely, consumers in western Canada will experience conditions seasonable to cooler than normal and last year. Eastern provinces will see dry conditions, while the Prairies will have the highest chance for rain, show Planalytics’ estimates.

“The 4th of July holiday falls on a Saturday with many businesses closed on Friday, July 3rd providing a long weekend for consumers. Seasonable conditions are expected for most of the U.S. during the Independence Day holiday,” said the Planalytics research note. “The warmest anomalies compared to normal and last year will be focused in the North Central region, resulting in a boost to demand for summer apparel, and cold beverages. The holiday will welcome dry conditions for most in time for barbecues, aside from spotty showers interrupting celebrations in portions of the Southern Tier.

According to the National Retail Federation (NRF), 76% of consumers plan to celebrate the holiday, which is down from 86% in 2019. This drop is primarily driven by less consumers planning to participate in traditional celebrations such as parades and fireworks. Despite the decline, the average spend is in line with historical trends at $76 per consumer.