According to new research from mobile analytics firm Flurry, health and fitness app usage in the U.S .has seen a sharp uptick over the past few years, growing by 330% between 2014 and 2017. And these users are loading up their apps at a decently high level of frequency. Flurry’s survey, conducted in August 2017, found that three-quarters of the health and fitness app users opened their apps at least twice per week, while more than one-quarter of respondents were at the very high end of usage, opening their app 10 times or more on a weekly basis.

Flurry also broke out health and fitness apps into several subcategories. The company’s analysis revealed that apps focused on workouts and weight loss accounted for the majority of health and fitness app usage by far, making up 73% of sessions in July. General health apps were a distant second, accounting for a little more than one-fifth of sessions. Meanwhile, studio and fitness content apps and nutrition apps each accounted for a single-digit share.

While Flurry found that fitness apps have some of the highest levels of engagement, retention and frequency of usage, they still trail several other app categories in terms of penetration among US app users.

According to a January 2017 poll of US smartphone users from Edison Research, 60% of respondents used some type of health and fitness app or website on their device. That put the app category toward the bottom of the list. By comparison, navigation was the most popular type of service, used by 94% of respondents, followed by shopping and retail apps and sites (93%) and social media (90%). 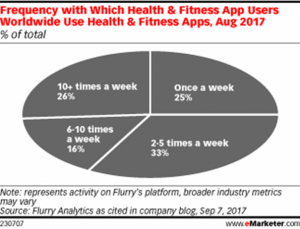