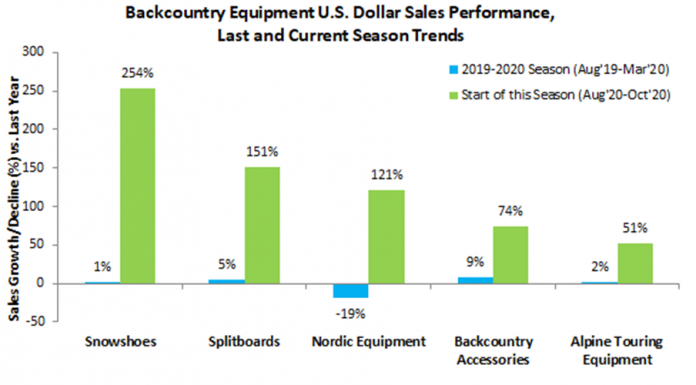 Backcountry-related equipment sales in the U.S. grew a staggering 76% in the opening months of this year’s snow season (August through October 2020) compared to the same period last year, according to The NPD Group.

Nordic and alpine touring equipment, splitboards, snowshoes, and backcountry accessories including beacons, probes, skins, and avalanche shovels, saw sales grow in the high double- to triple-digits to kick off the season. This is also a significant uptick compared to how backcountry product sales fared during last year’s 2019-2020 season as a whole.

This early season growth builds upon what NPD began to take shape in March. An acceleration of backcountry equipment sales began at the tail end of last season, driven by internet sales as many parts of the country, including ski resorts, shut down.

Looking at the snow sports equipment market in its entirety season-to-date, sales declined by 8% from August through October 2020. This was driven by declines in alpine and snowboard equipment – the largest areas of the market.

“We can expect backcountry’s popularity to carry through this season and for product demand to grow, especially as the COVID-19 crisis and social distancing measures continue, ski resorts make operational changes to accommodate the circumstances, and skiers and snowboarders pursue alternatives to get their alpine fix,” said Matt Powell, NPD’s sports industry advisor. “I suspect backcountry product will sell out quickly and the market will run into inventory issues, which may slow the sales trend as we move into the peak selling season.”