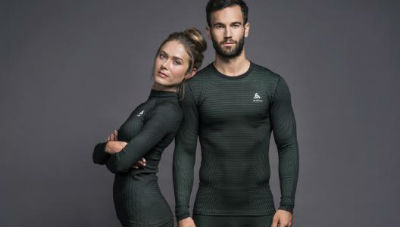 Two Swiss innovators of functional performance clothing, Odlo and HeiQ, are co-launching HeiQ Pure SPQR, a “triple-action sustainable” odor control technology. The technology will be part of the HeiQ Fresh Tech product family. The collaboration between the two companies started 13 years ago, when HeiQ helped develop for Odlo an odor control textile finish that would last 100 washes – known as Effect by Odlo.

“Effect by Odlo set the standard for performance wear with effective odor control. Great but not yet perfect means that we never stop refining the solution for our consumers,” said Knut Are Høgberg, CEO of Odlo.

For the past three years, HeiQ and Odlo spent thousands of hours in the laboratory and in the field to develop HeiQ Pure SPQR, which will be engineered into Odlo’s Spring/Summer’2020 next-to-skin products. HeiQ Pure SPQR is derived from renewable and recycled sources and delivers a triple-action for odor control efficiency. First, with only one-tenth of silver-ion content as compared to general silver-based odor control treatments, it is able to effectively impair the metabolism of bacteria (the process that turns odorless sweat into body odor). This is due to the second action – bio-based amino sugar polymer anchors silver-ions to amplify their performance and durability. And third, at a microscopic level, the amino sugar polymer creates a durable barrier film around the fiber, preventing odor compounds from sticking on the textile, explained the companies. Thus garments can be washed easily at low temperature, which extends the usable life of the garment and is more sustainable.

“We have tested odor control treatments from multiple suppliers. The result from the Odlo-HeiQ co-innovation is by far better than anything else we find in the market today,” Høgberg added